Impact sound reduction in the lab 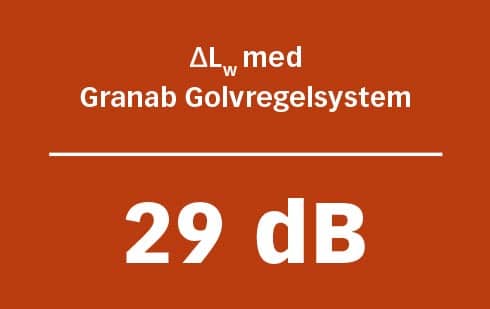 Granab subfloor systems have been tested by the SP Technical Research Institute of Sweden on a reference subfloor of 16 cm concrete according to the Swedish and international standard SS-EN ISO 10140.

The impact sound tests were conducted with 15 mm parquet flooring on flooring paper, Granab’s subflooring of 22 mm chipboard flooring that was glued and screwed to the 7000 system’s steel sections, green Sylodyn® dampening pads and spacer screws in the concrete subfloor. The dampening pads are built in under the steel sections and permit movements in the floor without impact sound being transmitted via the screws to the concrete subfloor. By comparing measured impact sound levels for completed floors with the levels attained for the lab’s concrete subfloor alone, the SP Technical Research Institute of Sweden can present improvement values for the Granab system (ΔLw) that were calculated in the one-third octave band according to ISO 717-2.

The improvement values from the lab can be used for calculating impact sound levels in buildings with other types of concrete subfloors in accordance with SS-EN 12354-2. Values for Granab systems and various concrete subfloors are in the database for the calculation programme BASTIAN. When calculating impact and airborne sound insulation in subfloors between rooms, the programme takes into consideration the effects of areas and room volumes, as well as adjoining structural elements, which allows both simple and cost-effective engineering of a building’s sound insulation. The calculation results have been compared with a large number of values from field measurements and have been shown to conform well to average values. Granab recommends maintaining a 1 dB margin when engineering to acoustic requirements in completed buildings in accordance with SS 25267/-68.

Floor covering class ∆Lw, dB Significance/Application. Floor coverings in the group
8A 25 – 28 Can fulfil sound class A between dwellings when they are laid on concrete subfloors.
For a full description, please refer to SP’s report (www.sp.se)

Impact and airborne sound insulation in homes and offices

Impact sound reduction in the lab

For adjustable heights from 30 to 140 mm, excluding floor covering.

For adjustable heights from 50 to 420 mm, excluding floor covering.

For adjustable heights from 70 to 420 mm, excluding floor covering.